- It was not very surprising that Norway decided to follow the example of many other jurisdictions and introduce a regime that enables the government to monitor investments and transactions of businesses that are important to national security. However the Norwegian rules on ownership control differs from that of many other jurisdictions by applying to both domestic and foreign acquirers without discrimination, says Vesterkjær,

- It remains to be seen which businesses and sectors that will be decided to fall within the new rules on ownership control. Until this has been further clarified there is some potential deal uncertainty here since the government can decide to include a given business or sector on a case-by-case basis and after the deal has been signed and even completed, comments Greaker.

The guide is distributed to key international players, among them legal directors, law firms and government agencies. 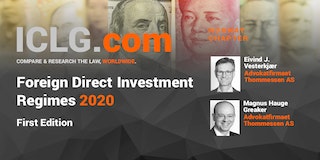