Scrapping of ships by so-called “beaching” is in the spotlight both nationally and internationally. Media reports show that “beaching” remains a widespread practice when scrapping ships. Most featured in Norway is the so-called “Harrier-case”, where the ship “Harrier” was detained by the Norwegian authorities on suspicion of being on the way to a beaching yard in Pakistan. The question is though, is beaching illegal? Or will it be in the future?

1. What is beaching and why is it a problem?

“Beaching” entails that a ship due for scrapping is simply sailed onto a beach for demolition and dismantling. The demolition works is often undertaken by extensive use of manual work, and has been subject to massive criticism due to dangerous and hazardous working conditions, and because hazardous waste is not handled in an environmentally responsible manner.

The beaching method is mainly used in India, Pakistan and Bangladesh. According to the NGO Shipbreaking Platform, these countries accounted for approximately 80% of the scrapping of large commercial vessels in 2017.

Within the EU, the Basel Convention has been implemented by EU’s regulation regarding cross-border shipments of waste (Regulation 1013/2006, the Cross-Border Regulation). The Cross-Border Regulation establishes stricter rules than the Basel Convention. It prohibits the export of end of life vessels (hazardous waste) to non-OECD countries. Export of end of life vessels within the OECD requires the consent of both the exporting and importing country’s authorities.

Through the Waste Regulation (FOR2004-06-01-930) Chapter 13, Norway has implemented the Cross-Border Regulation. As a consequence, it is prohibited to export end of life vessels (hazardous waste) from Norway to non-OECD countries. Export from Norway to another OECD country requires the consent of both the Norwegian and importing country’s authorities.

As mentioned, beaching is mainly carried out in India, Pakistan and Bangladesh. None of these countries are members of the OECD. Exportation of end of life vessels from Norway or the EU for scrapping in these countries is therefore prohibited.

In Norway, violation of the rules regarding export of ships for scrapping may lead to criminal liability. According to the Norwegian Pollution Act, anyone who intentionally or negligently imports or exports waste in violation of the Waste Regulation or the cross-border regulation, risk fines or imprisonment for up to 2 years. In the Harrier-case, the charges against the ship owner are based on these provisions.

The Norwegian Pollution Act is supplemented by the Norwegian Criminal Act’s general provision regarding criminal contribution (the Criminal Act Section 15). Anyone who
intentionally or negligently contributes to the violation of the export rules, including contribution to the export of end of life vessels from Norway to non-OECD countries, may be held criminally liable. In the Harrier case, the charges against the insurance company that provided the vessel’s insurance for the voyage from Norway to Pakistan are based on contribution to violate the Waste Regulation. It remains to be seen whether the Norwegian courts share the prosecutor’s view that this constitutes criminal contribution. If that should be the result, it is possible that also others who facilitate an illegal export may be held criminally liable.

In March 2018, a Dutch court handed down a historical verdict. For the first time, a shipping company was fined for illegal export of ships that were to be scrapped at a beaching yard. The Dutch shipping company Seatrade sold four ships to an intermediary (a so-called “cash buyer”), who would scrap the ships at beaching yards in India and other countries offering beaching facilities. Both Seatrade and two of the company’s managers were charged with violation of the Cross-Border Regulations. Seatrade’s defense was, inter alia, that the decision to scrap the ships was taken while the ships were located outside the territorial waters of the EU. The court, however, found that both the owner of the ships, Seatrade, and the two managers had acted in violation of the Cross-Border Regulation. Due to the case being the first of its kind, the defendants were not sentenced to imprisonment, but a total fine of $925,000 was imposed. In addition, the two managers were imposed a one-year ban on having leading roles within the shipping industry. 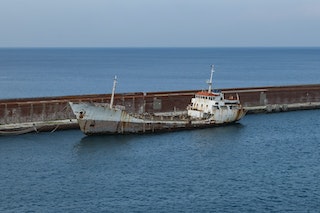 3. New regulations are on their way within the EU and internationally

The need for improved and more comprehensive regulations has led to an international effort to prepare new regulations. In 2009, the International Convention regarding Safe and Environmental Recycling of Ships (the Hong Kong Convention) was adopted by IMO (the United Nations Maritime Organization). The Convention establishes requirements for ships both during their operational lifetime, as well as requirements for the scrapping process and the shipyards used for scrapping.

In contrast to the Waste Regulation and the Cross-Border Regulation, which only apply for ships that are geographically located within Norway/EU, the Ship Scrapping Regulation will include all ships sailing under EU/EEA flag, regardless of where the ship is located. Exceptions have been made for certain ships, including ships with a gross tonnage of less than 500 GT. The Ship Scrapping Regulation requires the scrapping of ships to be done only at approved scrapping yards (yards on “the European list”). In order to be approved as a scrapping yard, it is required that the yard is operated in a proper and environmentally secure manner, that the yard is operated from permanent constructions and that damaging effects on human health are prevented. Whether or not beaching can be legally used as a scrapping method for ships sailing under the EU/EEA flag after the full implementation of the Regulation will therefore depend on whether beaching yards are approved or not.

To date, only bout 20 yards are approved for scrapping. All the yards are located in Europe. Several Asian yards using the beaching method have applied for approval, but so far none have been approved. The European Commission is, however, under pressure to include more yards on the list. It is argued that the European yards which so far have been approved do not have sufficient capacity to handle the amount of ships that are to be scrapped in the near future. However, a recent report from NGO Shipbreaking Platform and Transport & Environment, shows that the ship recycling facilities currently on the European list could have recycled all EU-flagged vessels scrapped since 2015.

At the same time, several of the beaching yards in Asia have carried out measures that improve the situation for the workers, as well as the environmental impacts of beaching. To the extent that the European Commission should approve any of these yards, it will be allowed for EU/EEA-flagged ships to use such approved beaching yards.

Ships that do not sail under the EU/EEA flag will after 31 December 2018 continue to be governed by the Waste Regulation and the Cross-Border Regulation. For these ships it will still be their geographical position at the time the scrapping decision is made that determines whether or not exportation for scrapping and beaching is illegal under Norwegian and/or EU regulations.

4. The regulations are supplemented by “corporate responsibility”

The situation is thus that neither under current regulations, nor after the implementation of the Ship Recycling Regulation, is there a total ban against beaching of Norwegian or EU owned ships. Whether beaching is legal or not will depend on which flag the ship is sailing under (EU/EEA or non-EU/EEA flag), and where the ship is located at the time the scrapping decision is made. The damaging effects of beaching, in combination with the regulatory limitations, has, however, led to efforts being made by third parties, in an attempt to limit the use of beaching. In May this year, DNB Bank ASA, along with other European banks, joined the “Responsible Ship Recycling Standards”. These are guidelines for the banks’ ship financing business, which instruct the banks to incorporate the requirements of the Hong Kong Convention and EU’s regulations directly into loan agreements etc. In this way, the borrower is obliged by contract to perform in accordance with the requirements of the regulations According to the NGO Shipbreaking Platform, large companies such as Volvo, Volkswagen, ABB and Philips have communicated similar views when selecting shipping companies to ship their products. The shipping companies are met with requirements regarding sustainable recycling of their ships as a condition for chartering their vessels. The development is thus clear – irrespective of whether beaching is legal or illegal under applicable regulations, ship owners must increasingly also adhere to requirements and expectations regarding sustainable recycling of ships from partners and customers.